The Hospitality of God

Scripture scholar, Brendan Byrne, entitled his commentary on Luke’s Gospel: The Hospitality of God. His thesis is that God has visited God’s people in the person of Jesus, offering the hospitality of love and life. For example, we see this at the beginning of Luke’s gospel in the Canticle of Zachariah: “Blessed be the Lord, the God of Israel, for he has visited his people and brought redemption to his people” (Lk 1:68). We could point to another example at the end of the gospel, when the disciples are leaving Jerusalem on the way to Emmaus. When the Risen Jesus approaches them and asks them what is troubling them, they ask: “Are you the only visitor to Jerusalem who does not know of the things that have taken place there in these days” (Lk 24:28)? Of course, the irony is striking, for we, as readers, know that JESUS IS THE VISITOR!

As we read the Gospel of Luke, we see the different reactions of people to this visitation of God in Jesus, the image or icon of the invisible God. We see some people, like the disciples, who are open to Jesus’ invitation to follow him, but are constantly misunderstanding his message. We see other people like the religious authorities, who are closed to Jesus, unwilling to be drawn into his message of hospitality and grace. Finally, we see some seemingly insignificant people, who respond immediately to the call of Jesus. We might think of such characters as the blind man Bartimaeus, the woman who was bleeding for many years, the synagogue official Jairus, and the Syrophoenician woman. Each of these people are open to Jesus’ invitation or hospitality, and in so doing, are dramatically changed.

Zacchaeus is another of these seemingly insignificant people, who demonstrate some openness to Jesus and his ways. This openness, in turn, provides the opportunity for Jesus to do something wonderful for Zacchaeus.

We know from the gospel story that Zacchaeus is a CHIEF tax collector and a WEALTHY man. He does his job well! Not only is he collecting taxes, and perhaps extorting people in the process—after all, he is a wealthy man—Zacchaeus is consorting with the pagan Romans (who were considered “unclean”) and he is dealing with coins that have the image of Caesar—who was considered a god—on them. We can imagine how people treated Zacchaeus. He was a social outcast from his own people.

Yet, this little man, yearns to see Jesus. He is short and so he climbs a sycamore tree. He makes an effort to see Jesus. He is open to Jesus. And Jesus sees this. He says something extraordinary: “Today, I want to eat at your house!”  People immediately grumble, “Does Jesus not know who he is and what he does? How can he stay at his house? The house of a sinner.”

Then two things happen. First, Zacchaeus reveals how much the encounter with Jesus has changed him. He says that he is giving half his possessions to the poor. He also says that he will pay back four times the amount of money to anyone he has cheated.

Second, Jesus reveals that he sees deeply within Zacchaeus.  He does not see “just” a tax collector. He sees a son of Abraham. The hospitable gesture of Zacchaeus to be open to Jesus has opened him to God working within him. He has been welcomed into the hospitality of God’s grace and forgiveness and love.

So, too for us. We can learn from Zacchaeus to be open in seemingly small ways to God’s grace. These small gestures on our part can open us into the hospitality of God’s grace and forgiveness and love. And like for Zacchaeus, God sees deeply within us. God knows that we are broken and sinful, but God sees more deeply. God continues to invite us to respond to God’s grace and forgiveness and love. God sees, always, that we are God’s sons and daughters. 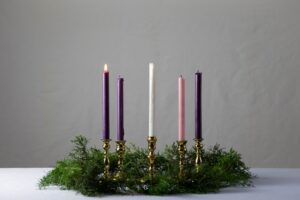 It usually surprises people to hear the readings at the beginning of Advent; they expect readings that will prepare them for Christ’s coming at Christmas… 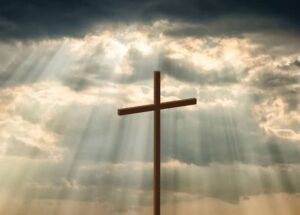 This reading today clearly shows us the awesome magnificence of Who Christ really is – the manifestation and icon of the great almighty God on Whom this reading is focusing.  This God is infinitely much more beyond kingship…

Stay in Touch!
Subscribe to Resurrection Bulletin our eNewsletter